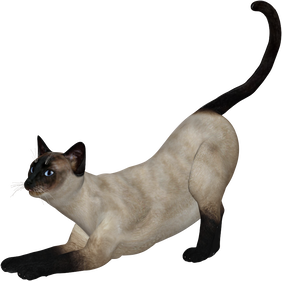 How did the Tonkinese get their name?

Tonkin was the name of the French Protectorate prior to becoming North Vietnam.  This area lies right between the countries of Burma and Thailand - just as the Tonkinese breed lies between the affectionate Burmese and the elegant Siamese breeds, so it seems an obvious choice from the English and French cat association of the time, around the mid nineteenth century.

Are Tonkinese merely a cross between a Siamese and Burmese cat?

A resounding no!  The beautiful Tonkinese is one of the earliest recorded varieties of domestic cat - there are pictures and mentions of them in the various Thai folklore and poems dating back at least 400 years.

When the Cat Fancy was born, with the Crystal Palace Cat Show in England 1871, the Tonkinese were there along with the rest, presented as the Choc Siamese.  In their early days in Britain, all cats coming out of Thailand were called“Siamese”, regardless of colour. Two types of those cats were the most prominent. The cream coloured body with sharp defined points and notable
blue eyes was called “Royal Cat of Siam” or “Palace cat”, reflecting the legend that they were kept only in royal palace. The other type was called “Temple Cat”, also known as “Chocolate Cat of Siam”, with deep brown body and hardly visible points.
The Siamese Cat Club encouraged breeders to distinguish between the breeding of the Royal cat and the Chocolate cat of Siam. The chocolate cat was in fact a Tonkinese.